The Smartscan 1000 series sensing unit consists of a transmitter and a receiver column that face
each other across an area to be safeguarded. The transmitter contains a row of infrared, light emitting diodes that sequentially transmit parallel beams of energy to corresponding receiving diodes  in the receiver column. When the control/monitoring unit detects an obstruction in the optical path of one, or more of the beams that form the sensing field, the output signal switching devices (OSSD’s) will turn-OFF immediately. 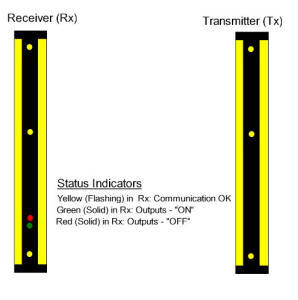 TRANSMITTER OK: A yellow ‘blinking’ indicators in the transmitter column indicates the unit is powered-up and the electronic system operational.

COMMUNICATION OK: A yellow ‘blinking’ indicators in the receiver column indicates that communication is established between transmitter and receiver.

OSSD's ON: Green LED indicator at the receiver unit illuminates when the electronic output switches, OSSD1 and OSSD2 are ‘ON’ (only when the light curtain detection zone is ‘clear’ of any obstruction).If the Green LED indicator is flashing an output fault has been detected.

OSSD's OFF: Red LED indicator at the RX unit illuminates when the electronic output switches, OSSD1 and OSSD2 are ‘OFF’ e.g. a trip condition or, when the light curtain detection zone is ‘blocked’. If the Red LED indicator is flashing the system is in lockout a fault has been detected. 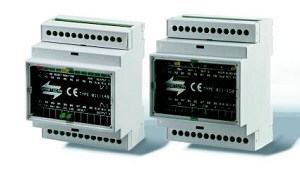